When Alan Bibey was announced as the 2019 Mandolin Player of the Year during the IBMA Awards show in Raleigh, no one was applauding louder than his home folks in Danbury and Stokes County, NC. Those good people have had his back since he was just a youngster 40 years ago entering mandolin competitions while growing up near Walnut Cove.

Alan tells us that when he had a chance to talk to some of after the show, they told him that they were all watching on facebook, and were surprised he didn’t hear them yelling all the way in Raleigh!

Despite his active and long-running career, including being a founding member of IIIrd Tyme Out, being called upon by the departing members of Quicksilver to form New Quicksilver in 1986, and his helming of the band Grasstowne since 2006, Bibey had never before even been nominated for mandolin by the IBMA. Fortunately, that oversight was corrected this year.

But Alan says it didn’t bothered him that his peers never chose to recognize him.

“It was a big surprise when they called my name. This year I was happy just to be nominated.

Going down the aisle to accept, Sam Bush stopped me and gave me a big hug. That was huge. And then up on stage, Phil Leadbetter grabbed me from behind and said, ‘I told you so.'” 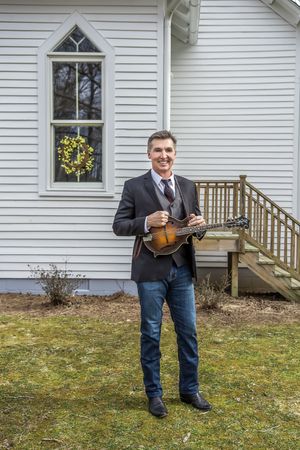 Those home folks in North Carolina are remembering Alan’s win this weekend with a welcome home concert and mandolin workshop this Saturday at The Arts Place in Danbury NC. Alan Bibey & Grasstowne will perform in concert at 3:30 p.m., which will include an onstage interview of Alan conducted by Eddy McGee, and a post show meet-and-greet with the band. Bibey will conduct a mandolin workshop from 1:00-2:00 p.m., limited to 20 students.

And he says that being remembered in your home town is a big deal.

“All the folks in Stokes County have supported me since I was a kid. Growing up, my dad was always behind me, but some of them didn’t like the idea of me making a career in music. But I could always count on my dad.

I remember seeing Monroe when I was 5. My daddy said he had to put me on his shoulders so I could see. They were playing on a flat bed truck. When I got home, I told my dad that this was what I wanted to do. So he took me back in the bedroom and showed me a few things I could do on his mandolin. He told me that when I got better than him, he would start learning to play banjo. I’ll never forget the day he told me that he was going to get a banjo.

My dad said that when I was a kid, when we went into the fiddler’s conventions, he would see the other parents shake their heads, knowing that I would win. But that’s all I did was pick – pick and play ball, basketball and baseball, all the way through high school.

I was picking tobacco from the time I was 5. Back then, I was the water boy, bringing water out to the barn. My mom’s parents grew tobacco, and when I could actually help out, I would spend my days priming tobacco starting at 5:00 in the morning, and going all day for $18. So when I could win $5 at a convention, that was a big deal!”

Alan also believes that winning Mandolin Player of the Year has already helped him professionally.

“Grasstowne is already getting more and better gigs for 2020. Winning IBMA seems to have made a big difference in our visibility. Promoters I have worked with for years have been treating us with more credibility. And I’ve had camps call me that I’ve never heard from before.”

With Bibey in Grasstowne are Justin Jenkins on banjo, Zac McLamb on bass, Tony Watt on guitar, and Laura Orshaw on fiddle.

Folks in Stokes County can show up and congratulate Alan this Saturday, December 15. Ticket information can be found on the Arts Place web site, or by calling 336-593-8159.