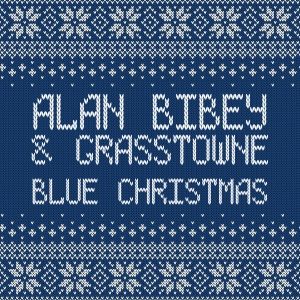 Despite the lack of touring opportunities, 2020 has been a good year for Alan Bibey & Grasstowne. Tracks for the band’s last album have seen success on the charts, and Alan won his second consecutive award from the IBMA for Mandolin Player of the Year.

They also signed with Billy Blue Records and recently secured the #1 spot on our Bluegrass Today Weekly Airplay chart for the first single with them, a remake of Hitchhiking To California.

Now, in honor of the impending holidays, Al and the band have released their first ever Christmas single, a grassified version of Elvis Presley’s 1957 hit, Blue Christmas. And on the eve of Thanksgiving, no one can complain that it’s too early for holiday songs!

Bibey recalls a painful memory regarding this number.

“When we were considering recording a Christmas song, Blue Christmas came to my mind first. It brings up great memories of me doing my best Elvis impersonation for my daughters when they were really small. That’s proof you’ll do anything for your kids, but it made that song special to me.”

The song was cut by the current Grasstowne, with Justin Jenkins on banjo, Tony Watt on guitar, Zak McLamb on bass. Ron Stewart plays fiddle.

The single for Blue Christmas is available now to radio through AirPlay Direct, and will be released for purchase on December 4 from all your favorite streaming and download sites.