Hitchhiking To California from Alan Bibey & Grasstowne Posted on August 21, 2020 By John Lawless 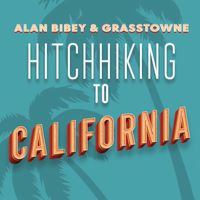 Here’s a blast from the past from Alan Bibey & Grasstowne – from 35 years ago to be exact!

It’s the debut single from their upcoming project with Billy Blue Records, Hitchhiking To California, one Alan recorded with New Quicksilver back in 1985. That marked Bibey’s first real professional gig in bluegrass, when he was 19 years old.

Now Alan and co-producer Jerry Salley have reworked that Wes Golding classic, adding a third verse and tweaking the two existing verses for this new cut. Al says that this was done with approval from Wes, who he thanks for his generosity and kindness.

It makes for a rip-roarin’ track, featuring newest Grasstowner Patrick McGonigle on fiddle and tenor vocal, along with Bibey on lead vocal and mandolin, Zak McLamb on bass, Justin Jenkins on banjo, and Ron Stewart sitting in on guitar, as Tony Watt was unable to make the session due to COVID travel restrictions.

Hitchhiking To California is available now wherever you stream or download music online. Radio programmers can get the track at AirPlay Direct.

I smell a hit.